Photos and Information about the Sognefjord Bus Stop Mural Project

Apples Up for Grabs

The final chapter of Leikanger. While operating one of our submersibles today our team recorded an amazing event. One of our team members who was handing out fruit to the crew accidentally dropped an apple overboard. Right before the apple reached the surface of the fjord bottom, two large sea worms appeared from seemingly nowhere, to devour the fruit. Many sea creatures are known for the carnivorous eating behaviors, but today we found that Fjord Monsters eat fruit as well. This Fjord Monster represents the last recording for Leikanger, thereby adding Leikanger to the list of counties along the Sognefjord which our team has documented. Wish us luck as we continue ever deeper into Sogndal.

N.I.M.A. has had to reevaluate its opinions of Fjord Monsters and exactly what these creatures are. Sporadic intelligence which was previously interpreted by our researchers now seems to be prevalent in all Fjord Monsters and this monster that we spotted today is complete proof to the theory. This Fjord Monster dandy was in full regalia today with fishing attire to fit the weather’s needs. Clearly this individual was aware of his surroundings and was dressed to impress. Perhaps all Fjord Monsters not only possess a higher intelligence, but are ambassadors among the animal kingdom. Stay tuned! 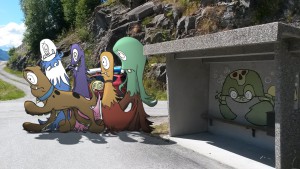 According to our almanac regarding Fjord Monster activity, the 6th of June should be the best time for anyone interested in witnessing a true Fjord Monster to observe one in the flesh. Our raports indicate that the most centralized activity will be in the town of Høyanger. We at the Nordic Institute for Marine abnormalities certainly will be there for this unique opportunity. If you are in Høyanger, feel free to contact one of our researchers regarding these creatures should you have the luck of finding one. This photograph was sent in to us today by an avid researcher who found these 5 Fjord Monsters crossing the road to get back into the fjord. In broad daylight! Keep your eyes peeled, and hopefully you too will see a Fjord Monster at Gøyanger.